Need some extra stealth for your vsr? Targets hearing where the shot came from? Read on…

Beer or Coke can

There’s been a lot of fanfare lately about a revolutionary foam filled silencer which is apparently a “game changer” for owners of a popular, but loud, m24 variant. But does a cheap, foam filled (like every other one) silencer solve the noise problem on a spring sniper rifle? Of course not. The Sniper should always be looking to better themselves and their kit, and as with camouflage, sometimes that takes a bit more effort than just adding an item to your basket.

(This guide is aimed at players of the glorious VSR master race, but some of it might apply to other rifle platforms too.)

First off, for people who don’t visit this site often, I’m using a cyma Cm701 variant vsr, which is more robust externally than the TM, and it isn’t a stock one either; I run an airbraked WASP piston from the Sniper Mechanic which has had a big impact on noise levels. That’s not to say you need one, and there are alternatives, because the rest of the advice should help bit by bit anyway. I’ve been trying to get it down to a similar level as a gas rifle, so I can take shots without giving my position away, and so I can ignore Tanaka M700 owners who won’t (James…) shut up about how quiet they are. The plan was to combine the reliability and performance of a spring platform but tackle the weakness which is the extra noise created. Using a decibel meter app on my phone, at two feet from the barrel I’ve got it down to 11-16db. Without a BB loaded (which reduces it a bit further). That puts it on a par with whispering apparently, and is barely audible at two metres, let alone anything outside a 20 metre MED.

Anyway, introduction done and onto the important bit. Let’s start with a look at where the noise comes from. Spoiler – it’s not the end of the barrel.

Here’s a stunning VSR sniper rifle in its basic parts. The only place the noise can come from when you fire is the bolt (A). The spring slams the piston against the front end, which reverberates through the receiver (B), echoes through the beautifully crafted but hollow stock (C) and then the easy escape for that noise is to shoot out of the barrel behind the BB at (D). Nothing complicated

So, my thinking was to reduce all the elements of that cycle. Yes, a decent silencer on the end will cut some of the noise out, but only that part of it, and it all needs addressed. I’ll start with the easiest bit.

If you Google it, the most basic advice on reducing noise is to stuff the stock with something to prevent the echo and reduce the hollow sound of the gun firing. Simple. What you fill it with varies though. I’ve seen everything from old t-shirts to modelling clay to expanding foam. Expanding foam expands. It can crack your stock. Don’t.

Do I want the extra weight of modelling clay in my gun? No. It’s a very lightweight, mobile and well balanced platform. I don’t want to interfere with that. So I used cotton wool, like (some) real steel silencers.

It’s lightweight even when tightly packed in, cost very little, and can be worked better into tight spaces. It also doesn’t change with different weather conditions. I don’t have a picture handy of inside the butt end because my rifle is taped up, although it should be the obvious bit when filling the stock, but if you look at the photo above I’ve filled ALL the spaces, apart from the magazine bay because that’s important and I don’t want any issues with the mag.

On the exterior, as a side note, I’ve wrapped the rifle in three layers of tape. Partly for looks (camo), and partly because it might just help dampen things. I used flecktarn as the base but it was crap, so the top two layers are done with the much better British Army Scapa tape. I did two layers because it was a fifty metre roll and I couldn’t think of any other use for it. Note also in these pictures that I haven’t attached any sling mounts, and the bipod isn’t on during games. Sling mounts add noise. The bipod adds weight and I never use it in the field. 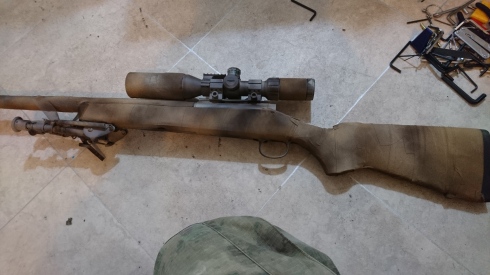 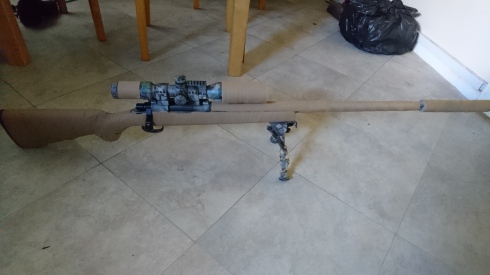 This is fitted with a sorbo pad (the blue bit with a black rubber washer on top) which I picked up from fire-support.co.uk many years ago. As you can see it’s absolutely battered now but this might help if it’s softened up. The job of the squishy sorbo pad is to better absorb the impact from the piston. Not a major amount, but for this project every little bit helps. The bigger boost to your stealth comes from the WASP.

It’s unweighted on mine, I’m running 475fps on 0.20, and with 0.45 it’s bang on for joule limits and other boring maths. The important feature here is the airbrake. 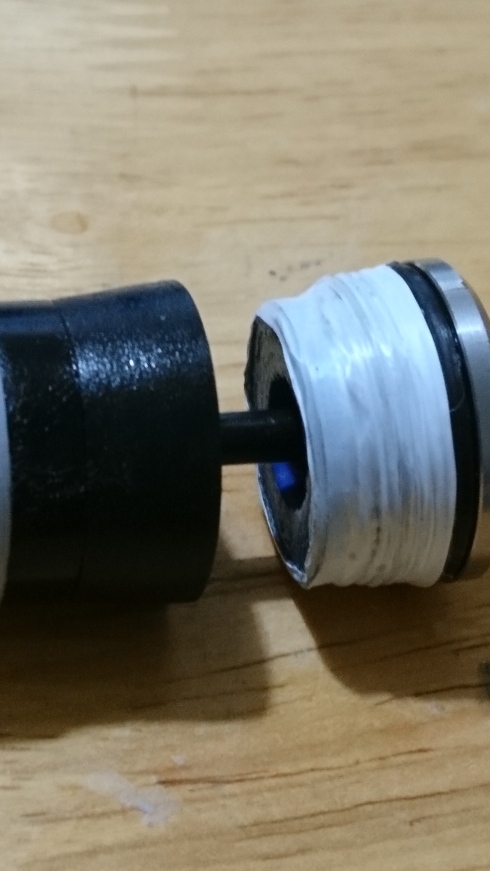 A stick on the end that fills the hole in the cylinder head and reduces the airflow, forming a cushion of air at the end which slows the last bit of the piston impact. This is a major improvement, but unfortunately a lot of vsr pistons don’t have it fitted. It’s worth investing in the piston if nothing else, although the rest of this guide can probably be done for very few of your local currency.

That’s not all though.

I’ve used electrical tape on the end of the spring to dampen the vibration of the spring against the piston. But that’s not the best part yet. Thank you to Sniper Mechanic again for the Beer Can Mod (No it wasn’t a diet coke). The spring vibrating is a bigger problem than you realise, and I found this had the biggest impact on deadening the sound.

You only need one can, but why not. 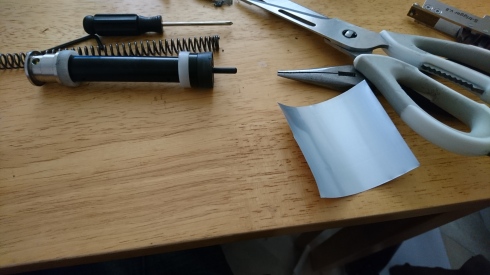 Cut a square out a bit smaller than the inner part of your piston. What we’re looking to do with it is roll it up and put it inside the piston, to act as a sleeve for the spring and stop it rattling inside. 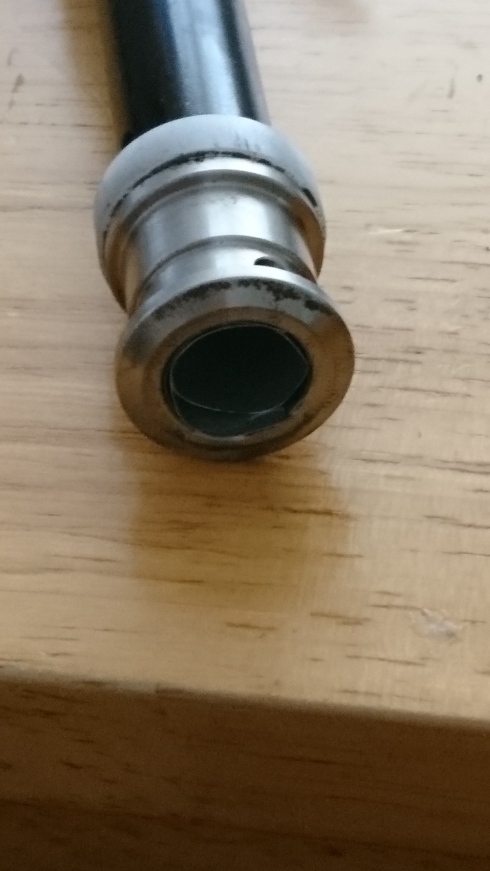 I used two. To make it as tight as possible.

So at this point, I’ve done all I can to dampen the impact inside the bolt, and I’ve reduced the stock’s echo.

Next up, I got a sheet of thin foam from the local old lady craft shop. 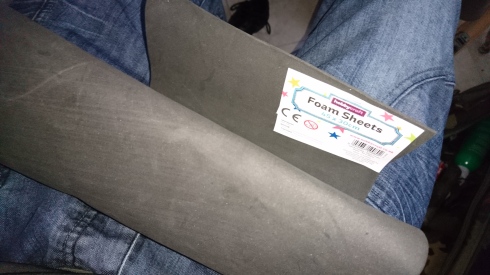 This is another Sniper Mechanic tip. I love you Dan.

This needs cut to the size and shape of your trigger box. Twice. If you’re not confident with sharp scissors, ask an adult to help.

Then these two parts need glued to the inside of the stock so that the trigger box is cushioned.

The final component then is the end of the barrel. This is where the silencer comes in. Even a basic foam filled one will do something to trap the noise that escapes the barrel behind the BB. The longer the BB stays in the barrel, the more chance the noise has to dissipate before being let out, so heavier bb’s will help a little. My current silencer, while I await something better, is a very cheap one which came fitted with a spring inside and three small, round foam blocks, which covered a third of the length of it.

Obviously all that empty space was no good ,so I filled in the gaps using a small foam roller, which was a different density to the supplied foam, and alternated it to help baffle the sound a bit. I’ll admit it’s not the greatest, and I will upgrade it soon, but at the moment it does a good job and I’m happy with it.

So there we go. 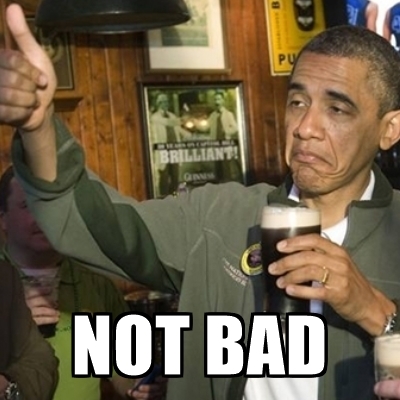 Not finished though. I forgot the receiver part. I’ve dealt with all the other key components, but then I had a thought. All these parts have to fit together. And vibrations can still travel from the receiver to the stock and other parts. And I need rid of that metal vibration. Cue one large roll of electrical tape.

The cyma has a metal trigger guard. I figured vibration could travel from the bolt, through the trigger and onto the guard. So I used electrical tape as a thin, rubbery cushion between the two, much in the same way the trigger box is padded with foam against the stock. 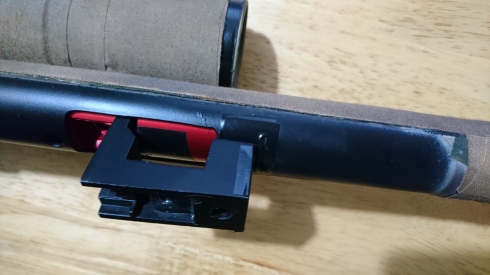 I taped up where the hop unit meets the barrel, at all points, and added tape to the front of the hop block where it contacts the stock.

(not shown) Where the scope rail attaches to the stock is also taped. And then superglued because it would come loose occasionally. (shown) Where the rings connect to the rail, is also taped. This might all seem pointless to some, but every little bit helps. Inside the outer barrel, the inner barrel is held by three rubberised spacers, and wrapped in cotton wool which is in turn held on with Scapa tape (yeah I found another use). There’s a piece of electrical tape again just around the tip of the barrel  in case it vibrates against the silencer adapter.

All the screws are wrapped in PTFE/Teflon tape. Not because I want a better airseal, but again to just provide a little cushion between the screw and wherever it goes into. Detail.

Lastly, while I’m on about tape, I also covered the bit of the stock where the bolt handle makes contact with the stock. To dampen that too on the shot, but also to reduce the sound of the bolt handle being put down.

And done. I’d like to thank Sniper Mechanic for all his assistance in the early part of the build. His mods have played a big part in the end result. And all the Tanaka owners out there. For pissing me off enough to start this project.