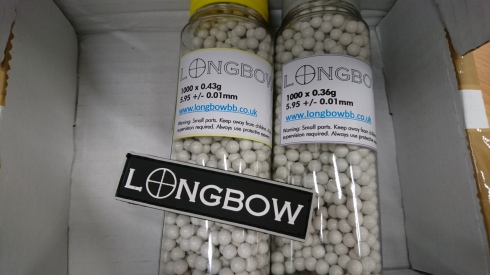 Just a few thoughts on ammo this morning. There was unfortunately a time when decent sniper ammo was rare. That which was available, was dark colours like black or dark brown  Nobody seemed to be able to make a white one that you could see, and the King was Madbull, who made glorious tan coloured 0.36g; the pro choice at the time and now almost extinct.

Fast forward to today though and through YouTubers popularising sniping (or just sniper rifles in some cases), we have a much wider choice of brands and weights – I’ll say brands rather than manufacturers because a lot of them are coming from the same factory in Taiwan, where the brand gets to choose the finish and weight and have them made and put into fancy containers for shipping.

The trend in the last couple of years has been to push for the heaviest weight possible, on the idea that the heavier rounds will travel straighter for further. Imagine shooting a 0.20g to a target at 70m, probably requiring a looping shot to get somewhere near. A 0.40g would travel much flatter to 70m, with less movement due to wind and hit more accurately as a result. This means we can set our scopes to be much better aligned with the shot and increase our accuracy  which us obviously key.

To the extreme end, manufacturers are now putting out 0.48g (sometimes incorrectly branded as 0.49g by one guy trying to fool the buyer) and we’re even pushing to 0.50g. Sounds great for all bolt action users.

Here’s where I’m going to put myself against all the advice from snipers, forums, technicians and retailers. I think heavy ammo is less effective and I’m going to switch back.

For the record, my rifle was set up by Dan the Mechanic for 0.45g and is shooting straight to 85m in a nice straight line. Or at least it was until I stripped it and tinkered with it. Sorry Dan!. The problem with the heavier ammo is that it moves slower, and so increases time to target. At extreme ranges, it’s taking up to three seconds to reach whatever I’m aiming at. Now find a player who stays still for that length of time. I’ve seen players on lunch breaks eat a whole hotdog in three seconds.

As well as the potential (likely) movement of the target, you also have to consider that the BB is in the air for longer, which means any wind has more time to effect it and push it off course.

In addition, there’s a relation between cylinder volume (the amount of air behind the shot), barrel length (the air in front of the shot that also needs pushed out), and the BB weight, so are the latest 0.48g bb’s the most efficient for your rifle to propel? In the coming weeks I’m going to do some testing with 0.30g, 0.36g, 0.40g, 0.45g and see what the results are if I can get a scope cam fitted to record it. I know that the 25th Mountaineers team is doing a lot of research at the moment into weights and how much energy they transfer, including testing of different brands, and the early data release on Airsoft Nation suggests that 0.33 is the most efficient weight, which has surprised everyone. I look forward to seeing their full results, although I hope if I can get a video put together it’ll perhaps be more useful for the sniper to show the visual effects of different weights.

In terms of what brand to buy, I’ve been a Longbow user since they came out and have no problem with them, although always open to trying something new. There won’t be too much difference between Longbow, Geoffs, ASG, Hotshots, Kicking Mustang or Cleanshot bb’s. Do buy good quality though to reduce fliers (those shots that randomly fly off elsewhere due to inconsistencies), and check for Bio certification if your site requires echo-friendly biodegradable bb’s. I do really like the Kicking Mustang ivory colour which is a little less obvious to the target but still followable through the scope, and a great idea. I believe a few of his competitors have now started to copy the idea, as brands do, which is a little disappointing if they lack ingenuity themselves but that’s business I guess; follow the leader.

Hope this has either helped or at least given people something to think about. Let me know what you use in the comments.

7 thoughts on “Balls so heavy…”