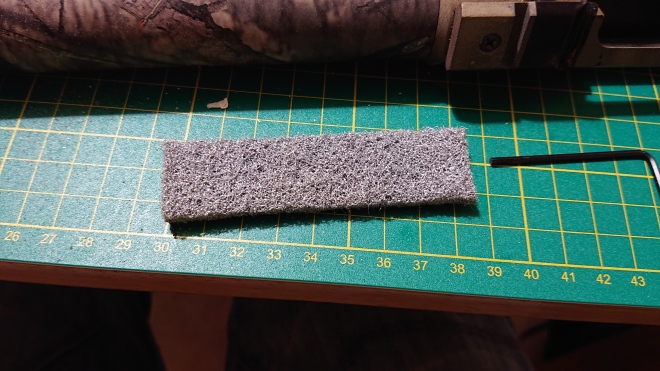 As I’ve covered in the silent vsr guide, one of the most important elements is the silencer. As well as making your rifle look cooler (sniper rifles don’t get accessorised much), and giving you that extra length, it catches the noise your rifle makes, and dampens it through whatever materials are inside. Even with all the mods I’ve done on my vsr, it’s still loud without the silencer in the end. I thought I’d quickly go through what I did just to give people ideas.

OK, depending on where you shop some places might call it a suppressor. But whatever you want to call it, you won’t get far until you actually buy one. What should you look for? Well, firstly try and either read the description properly, or try and Google the model you’re looking at to see how it’s made, and what’s inside. You’d guess that they’re all the same, bar length, width and maybe some detailing on the outside. Unfortunately, some cheap ones are empty, and some you can’t unscrew the end of to actually get inside to do anything. Having said that, mine was only about £10-£12 off Patrol Base a few years ago and is a pretty basic looking silencer. In the description, it said it had a spring (to give the bb a straight path through) and had foam inserts. A quick check on Google images showed the internals outside of the silencer which I guessed meant that the end cap could be removed. You don’t need to spend a lot, because you can mod the internals anyway.

Basically this. Sometimes you’re lucky enough to get enough foam spacers to actually run the length of the silencer. This one only had three rings of the stuff which was a bit disappointing but it didn’t matter too much. Originally, I filled the spaces in with cotton wool which had worked well in the past, but eventually bb’s started catching the wool fibres and pulling more and more into the space in the middle and it was catching the shots. I needed something new.

Ideally you want different materials of different densities inside to muffle the sound. I keep it simple by alternating. The current trend last week was scotchbrite (that horrible pan cleaning stuff) so that’s what I went and bought. 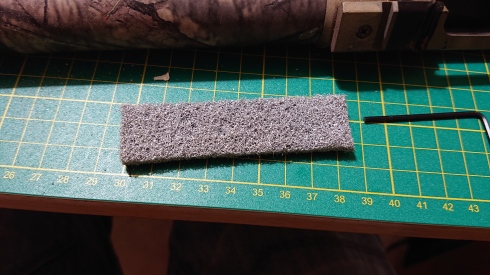 Three sheets for £1. Ideal. I only needed half of one though. I had the stock foam rings laid out with spaces inbetween on the spring, and cut the scotchbrite to size. Note that after cutting, there will be lots of loose metal fibers so give it a rinse under the tap first. Don’t be tempted to clean the dishes at the same time. That’s not important right now and you don’t want bits of food on it either.

Then it’s a case of wrapping it and taping it. I used a long length of electrical tape because in airsoft I go through metres of it and have a lot handy. Nothing will stick to the scotchbrite but tape sticks to tape, so wrap it round a few times. Job done. 3 foam and 4 scotchbrite spacers to absorb the sound.

But it’s not done. Because I like to do more. 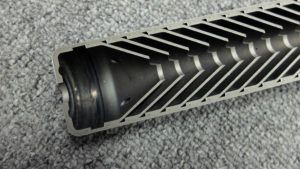 This is inside a real steel suppressor. Those metal fins are baffles. Baffles are like shields that deflect the noise back into whatever material is in there.

There was absolutely nothing around the house I could find that was that shape. Let alone loads of them. I don’t 3D print either. Hope was pretty much lost until I found a rubber washer in my bits box that happened to be the same diameter as the inside of the silencer. With a hole in the middle that was smaller than the diameter inside the foam rings (so it would “catch” and deflect noise back into the foam) and was still a bit bigger than a bb. Absolutely brilliant find, but I only had one of them and I’m pretty sure it’s an important part of something and I’ll probably need it.

So I hit the bottle. Two litres of Pepsi max, to fight the depression. Sugar free keeps the weight down so I don’t get even more depressed. Then I had an idea… 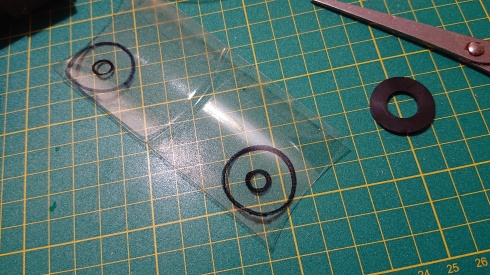 Brilliant. I cut seven of them out (one per foam/scotchbrite), and made a cut through the so I could slot them over the spring and fit them in.

They did come out a bit rough, given that my handling of scissors is about as good as my handling of flashbangs; not a good idea and probably better giving them to someone else. There was nobody else though…

It’s not a total disaster. There’s a clear path through and nothing to catch on. The baffles do a great job in catching the noise and the materials inside dampen it pretty well.

Hope this helps anyone not familiar with the internal workings of a silencer, at least for airsoft use. After testing, it’s been a great success and didn’t cost much to do. Which is always a good thing.

One thought on “The Silencer”