I’ve been set a challenge by Point6 Airsoft, to put together three different loadouts for an airsoft sniper, on very different budgets. It’s a good opportunity to delve into some kit articles and discuss different approaches, so I’ve accepted. Point6 will do videos (link at bottom) , I’ll blog it, and we’ll discuss ideas the following week. First up, the low budget sniper loadout; £200. And that’s absolutely everything, from eye pro to upgrades. It doesn’t sound like much, and it’ll be interesting to see how far £200 goes, but it’s an ideal starting point for anyone who wants to give the role a go, whether as a new or existing airsoft player.

Firstly, I’ll talk about what I’d be looking to achieve from the low budget loadout. This should be enough to get a player onto the field, with a rifle to pick targets off, and to have a level of concealment in order to stay hidden. The one thing you can’t buy is the skills to make the most of it, but I’ve got a tips guide somewhere which should help. Unlike some roles on the airsoft field, the sniper isn’t reliant on having tons of kit and a fat wallet to be a success (neither do the other roles to be fair, but there are fewer and fewer who realise that). Between the three budgets, the approach is still going to be the same. Staying out of sight while popping targets off with a quiet, accurate single shot rifle. Even with a high budget, I’d still opt for a spring powered rifle for reliability and consistency in the UK climate, which fluctuates quite a bit over the course of the year. So that’s probably going to be the best starting point.

Might as well start with the most important bit. Pointless even hitting the field without a weapon. I know several guys who would advise starting with a clone of the Marui Mk23 pistol, which is quiet, mobile and really good for sneaky play. However, the mags will cost a lot more, they can spring leaks, and you’re going to have to carry gas around on the field, which will vary in performance depending on the temperature. Additionally, and admittedly down to my own lack of skill, I find pointing a pistol accurately using the iron sights a lot more difficult than having two hands on a rifle, aiming down a scope. 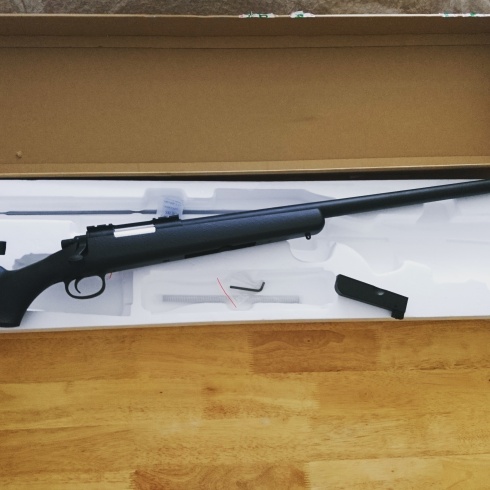 My choice as a cheap starter gun is the Well MB03, available from Taiwangun.com for £50, or less if they have a sale on. It’s a cheap copy of the mighty VSR rifle, and is very lightweight which is ideal for running through the woods with. The VSR has access to a wide range of upgrade options which means it’s going to be endlessly upgradeable in the future as you choose to put more money into it.  It comes with 3x25rd mags, which is more than enough for a days play, and even comes packaged with a speedloader to boot. An ideal start, and saves buying extras and using up our money. It comes in two different finishes, wood effect or black polymer. I’d go with the black because the textured finish is a bit grippier and will be better when we come to paint the rifle later. Out of the box, it’s 470fps which is bang on where we need it to be power wise, so we’ll have good range without having to upgrade. What more could you want?

Obviously, to hit anything it’ll need a scope too. A quick look on ebay.co.uk and I find this cheap illuminated scope with mounts for £17.52. It’s 3-9×40, which is a 3-9x variable zoom with a 40mm lens. Perfect for airsoft use, it has a mildot style scope for making adjustments while you shoot, and comes with 20mm mounts so that saves buying mounts separately.

No airsoft site is going to let you play without eye protection, and most insist on boots too. For only £30, amazon do Kombat UK desert patrol boots. Nothing fancy, and I know most players will tell you to get a really comfortable pair of boots, but I ran a pair of £35 tan boots for 5 years before they started to wear down and didn’t have any complaints. Tan might seem a bit bright, but being a suede upper, they’ll take colour easily later in the build…

The other bit of essential kit is of course the eye protection, and I highly recommend the ones I use myself. These X1000 goggles from skirmshop.nl have been brilliant, and I’ve used at least 20 different sets of eye pro down the years. I’ve shot them multiple times at point blank range with my rifle (on the spare lens, not aiming at my own face)and only had to wipe off the bb residue afterwards. The lens sits away from the frame, which allows air to flow in from all directions and stop fogging, which is a godsend if you hate mesh like me. £15 depending on the exchange rate at the time.

£122.52 down so far, time to start looking like a sniper. Yes, it will absolutely depend on what your site looks like, but for a low budget build, I’m going to go with a leaf suit purely for versatility. It’s a brown mass and will be less noticeable on the floor than standard camo. Suit of choice is the kryptek-inspired 3D HIGHLANDERTM suit off ebay. It’s a good base to build on, the kryptek style pattern distorts shapes and lines really well and it has good colours. I’ve seen a lot of really good suits built on these by very experienced players. For £17.99, it’ll do nicely.

On top of that, to disguise the head and cover the hands, I’ve found a hat and gloves set for 3d leafy suits. Although it doesn’t match the base suit, for £10 for the two, it’d be easy enough to dull the colours down with a bit of paint and get it looking close. The balaclava will cover the head and neck where the jacket doesn’t, and we can glue stuff on later to help break up the outline, but most casual airsofters would probably look straight past it. Also worth a mention, the balaclava has a pull down mesh for the eye opening. I’ve got one on mine which is MFH, and you can see clearly through it, but it will hide the shiny plastic goggle lens and the face behind it. The gloves will cover your hands but keep a leafy sort of texture on them, and you can add onto them easily enough.

£50 left. Webbing. I strongly believe that belt orders for snipers are a bad idea. I’ve always felt they bounce around far too much when you move and people tell me otherwise. Try this then; lay prone as if you have a rifle in front of you, resting on your elbows, and try and get something from your jeans’ back pocket. Lots of movement. Now try and reach something from the chest area. Chest rigs are much better. Thankfully we’ve only got those three vsr mags and a speedloader to carry. They could fit into anything. I managed to get hold of a surplus British Army DPM chest rig for a pound from ebay. You can usually find one for a fiver or less if you search over the course of a week. Don’t pay more than £10, so for the sake of this article we’ll max it out at £10. 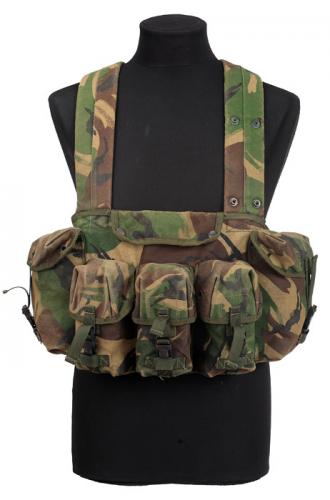 Yeah I’m going to try and get some bits and pieces for the remaining £40 that will make as much difference as possible. The first couple will be for the rifle. We need a much better hop rubber and a better hop arm to ensure the maximum grip on the bb, and to have a nice even contact. First up, the Maple Leaf hop arm, for £11.99. To go with it, at £8.49, the Maple Leaf Autobot hop rubber. Go with a 50/60 degree rubber, rather than 70/80. Softer rubbers grip better. With those two parts installed, we should be getting much better range and accuracy for very little cost. After that, a few homemade mods from the silent vsr guide will help quieten the rifle to make it mire effective.

a pack of raffia for £2, which you can use on the suit and rifle.

£4 on a 1mx1m section of 3D camo netting which you can cut up and use in patches on the rifle and chest rig.

£10.50 for two of these spray paints, one dark brown and one tan colour.

The tan will coat the rifle, and then lie your raffia randomly over the top and spray blotches of dark brown paint to break up the shape and add texture. Use the dark brown to lightly dust your balaclava, and spray a pattern on your bright tan boots. The tan spray paint can be used effectively to spray a pattern onto the flat brown side of the camo netting to break up the colours a bit, and then if you have the patience, cut a few sharp edges onto the rounded shapes so it’s not as uniform.

£2.50 left (more if you get the dpm chest rig for less but hey) for some green tulle mesh fabric, which can be cut up and attached to the suit and rifle. Nice and lightweight, good color, good decoration. Being a sniper is all about arts and crafts…

And there we go. It’s not much, but it is a good starting point with kit that will last and will still be useful in the future – not a starter pack that will go in the bin once you replace it.

The link for the Point6 video : https://youtu.be/SkHQV-AX60c