Skip to content
Posted on January 21, 2020 by stipwarn Posted in Other Articles

First Thinkings of 2020, and I’ll start with my first game day of the year. Full of excitement from the busy Christmas period, where I couldn’t get out and do anything, I was looking forward to a half day at the local woodland site, NTAC in County Durham, just to get out and play.

Shorly before Christmas, Longbowbb.co.uk very kindly sent me out some Modify X-Range VSR buckings to test, so the night before game day I managed to very quickly disassemble my rifle and stick a 60 degree one in. I’m a very big fan of Modify buckings. I had the Modify tan VSR bucking and despite it being the most basic design, the quality and the airseal were amazing and I always had very consistent results with it, so I was very excited to receive some (thank you Longbow!) . Regular readers will know that I’ve had very little sniper action in the last few months, and it was nice to dig out my leaf suit and rig, which haven’t seen light of day since the spring of 2019; in the heat of summer I just run a viper hood and BDU’s.

The site at NTAC is a small woodland one, mainly birch and smaller trees, with a lot of leaf litter scattered around. In the middle, as with most airsoft sites now, is a small village area constructed from pallets and the like. It’s not somewhere I visit often, but is by far the best place in the local area to test a sniper rifle – its location is totally sheltered from wind, so you can get a very accurate idea of how the rifle is really shooting. First order of the day, was to hit the chrono. A bit about my VSR first. It usually measures around 40-465fps on 0.20, which allows me to run 0.45’s a touch under the joule limit in the UK at 2.2J, which is fine. It has an AA hop unit, Skeees nubs which allow me to swap for different buckings, and a Maple Leaf Crazy Jet barrel. It’s not the most amazing rifle on the planet performance wise, but it hits around 80-85m nicely which is more than competitive, is usually reliable and well behaved, so I’ve put more work into getting it as quiet as possible instead.

One joule. I always wanted to build a 1J gun, but not like this. The fps varied wildly between about 320-360fps over ten shots. Clearly, I had messed something up during an overly quick bucking installation via phone light in my bedroom the night before. A quick conversation with Sniper Mechanic Dan and I’m informed the bucking design is simply too wide for the window of the Crazy Jet barrel. And the rifle might need a clean. Neither of which I’m going to attempt on site.

During the game, being without any other weapons so I had to give it a go, the rifle had a massive left swerve on every shot and invariably I scored no kills. So you’re probably reading this and wondering why I’m even mentioning the bucking if it didn’t work. Well, firstly a few people wanted to know how it went, and I’m not the kind of blogger who will get products to test and instantly putting up glowing reviews (often of kit that isn’t even tested). Usually I’d only review something if it was actually any good and I thought it’d be worth other people spending the money on. But there was something else that caught my eye.

What I did notice while testing and setting the hop is that this X-Range bucking has an incredible amount of lift, despite the huge loss of power and twisted installation. And likely a very dirty rifle because I’ve been slacking on maintenance. Even not set up correctly it feels like it will lob 0.48’s with the hop almost off, and lob them far. Obviously I will be sorting all that out, and until I can get hold of a different barrel with a bigger window in it I’m not going to be able to do much more at the moment, but this is the reality of product testing. I think set up properly that this will be an extremely good bucking. Alternatively, I like the incredible consistency of the Sniper Mechanic Flamingo bucking (0.5fps deviation across ten shots), and the Maple Leaf buckings which always just drop in and start working. Yet to test their Mr Hop but hearing great things from lots of users, and of course the Modify Tan.

Which leads me to the main point of the bucking story, eventually, which is compatability. Too often people are going out and buying the “best” parts available without knowing if they work well together, largely after a few good reviews online. It’s a little bit like football; you can’t just throw together the best players in the world and expect them to be a great team. It’s about finding the right ones that work together. With your rifle, compatible parts will give better efficiency and be much more consistent, which is going to help your performance. Do ask questions in Facebook groups about people’s setups. Look for common combinations and do your research first.

After getting hit out fairly quickly as a result, I sat down while the game rumbled on and looked down at my leaf suit. 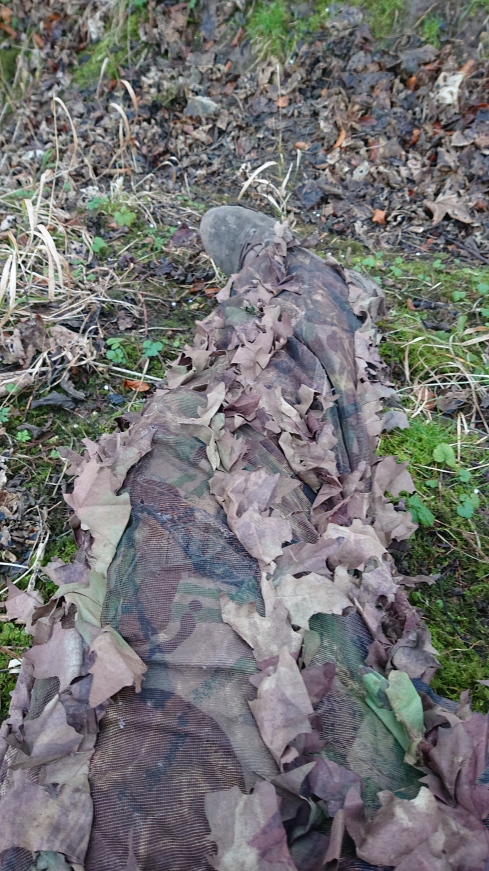 Once upon a time, this was the very best camouflage available. I remember opening the packet and thinking “wow” (£85, by the way). It’s seen a fair bit of use now. Most of the extra decoration has fallen off. The mesh is ripped in a lot of places and the suit is looking very tired. But I took this photo and looked at those evenly spaced rows of identical leaves and thought to myself that actually, although leaf suits are a step up from bdu’s in terms of appearance, they’re a step down in wearability and really could be better. I’ve never gone too far with adding extra leaves, but even in this woodland environment where I’ve had success in the past, it’s not as good as it could be. 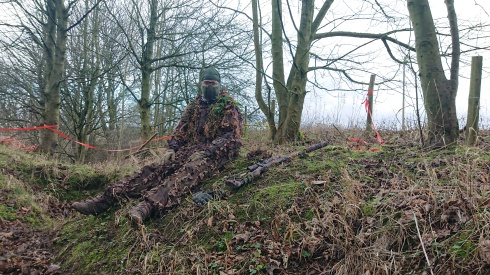 Mask and rifle wrap removed, forgot my ghillie gloves. It’s still not fantastic, but it does the job.

And for anyone ready to blame the DPM bottoms underneath –

Same site, same time of year, same pants. I love this photo because of the way the DPM breaks up shapes with its high contrast pattern, where a leaf suit being uniformly printed does blend in a bit at distance, although the leaves obviously do help with outlines. Flecktarn backpack and a cheap Chinese suit I was testing that day aren’t too bad either.

So, aside from a crap first day back which I’m happy to share because not everything is perfect all the time (unless it’s been edited a lot first 🙄), I have been keenly following a guy in the US by the name of Joseph Keller and really wanted to give him a mention. He’s been doing some fantastic work with Haloscreen style camouflage and it’s all been shared on his Instagram (link here). Please do give him a follow – it’s worth it.

Best get to the workshop then…