I was recently asked about sniper sidearms and what to look for. Ultimately, for most sites in the UK, you need to have one if you have a rifle over 350fps (which will be most of us), because anything over that power will have a minimum engagement distance, typically 15-25m, and the sidearm is required to engage targets under that. The MK23 pistol tends to be the standout choice for most players, so I thought I’d review mine after six months of use, and offer my thoughts on why it remains as ubiquitous as the VSR rifle.

Firstly, some general thoughts on carrying a sidearm. As a sniper, you’ll need to invest in one before you hit the field with your rifle, which is an added cost a lot of new players don’t consider. Sure, you could sling your aeg on your back and carry it around all day, but the added weight and noise will severely hinder your efforts at staying hidden. You want something compact, lightweight and quiet. Pistols are the obvious choice (no shotty sniper combo), and come in two forms – blowback, for realism, and non blowback. Heavy metal gas blowback pistols, which cost almost as much as a basic aeg, will be much less efficient due to the blowback (which wastes valuable gas propelling the slide back), adds weight to your kit and few are willing to cake them in tape or krylon to add camouflage. I have a teammate who swears by a budget plastic gas pistol he purchased from taiwangun.com, an M9, for £15. And I agree. It’s ideal for those awkward moments that someone gets a little too close, without giving away your position. For around £40 you can pick up an ASG MK1 Ruger, which is a decent enough gun despite the retro styling, and there are a few other non blowback (NBB) pistols out there if you can find them. It’s certainly one that I looked at, although heard reports that it needed a bit of work to get shooting correctly which put me off. I wanted something decent out of the box that I could learn to mod and upgrade in due course, and most snipers out there (the good ones at least) seemed to be using the same thing. 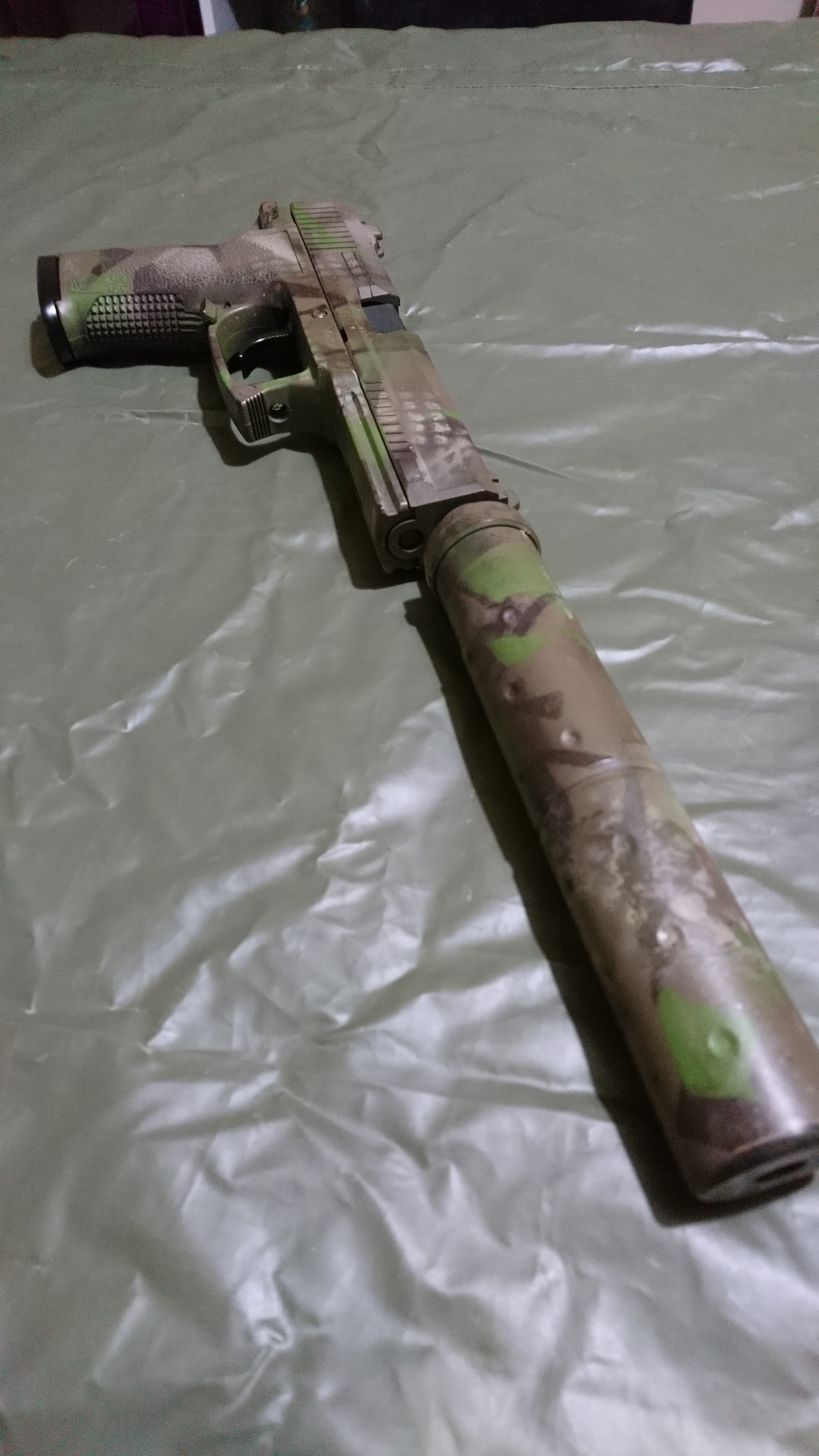 The MK23 was originally made by Tokyo Marui, with their excellent build quality and price (around £140) to match, and is one of those guns that just works really well. Using VSR style buckings, and with support from a lot of aftermarket parts, players have been able to get the MK23 shooting as accurately and with as much range as most sniper rifles, to the point that carbine kits are available for those looking to leave the rifle altogether and run a very compact, quiet and effective sniper weapon. For those on a tighter budget, ASG make a pretty good clone  for around £50 and STTI for £30. Personally, I was planning to upgrade the internals anyway, and was wary about going too cheap, so opted for the ASG. Whichever one you choose, the MK23 is a massive pistol, moreso with the suppressor on, so make sure you have a holster that fits – I’m using a Viper adjustable holster.

My MK23 came out of the box and straight into the shed for a paint job first because I can’t stand black, after which I attempted to take it apart to fit a better hop rubber and a Hadron TDC dust cover, which easily clips into place and applies pressure onto the centre of the hop arm. At this point, I discovered one of the screws was stripped and wouldn’t unscrew (it just turns forever), so at this point I’m stuck for trying to do anything further with it which is extremely disappointing. I tried to contact Patrol Base but was told only to note all the components and place an order for replacements, which is extra cost. So for the time being, it’s largely stock until I can figure out a solution.

(I used a Sniper Mechanic video to help with disassembly).

The other problem I had, on the first use, was that the mag release spring decided to jump out at in the middle of a forest, and I had to use tape to hold the mag in until I could get it home and glue a replacement spring in, which I liberated from a clicky pen. Not a great start., and I still feel the mags aren’t totally secure.

On the mags, I have two. The ASG one supplied, and a TM one. The TM has a much more efficient gas release and provides longer range and better performance, however I’ve noticed that it doesn’t like more powerful gas (winter in the UK needs it), because it has a high pressure gas release valve that vents it out. So in effect, I have a winter mag and a summer mag. Because I don’t use the pistol like a well known Austrian “sniper”, running around emptying full mags into people with excessive wastage; one mag with 20 BB’s in does me fine for most games. It’s purely a backup weapon for when things go wrong and I get caught out, which doesn’t happen often…

ASG mag on the left, TM on the right

I also noted that the range and accuracy was pretty poor, and this continued for a couple of months until I removed the suppressor and saw a vast improvement. The ASG suppressor has an inner barrel extension that runs through it. This increases FPS, but I reason mustn’t be particularly good quality and is the cause of the poor performance. This is next on my list of things to replace. Now running at lower FPS, without the suppressor, I’m noticing why people rate it so highly. It delivers AEG beating performance, despite all the issues with it, delivering long floating shots out to about 50m. It doesn’t need to, because I won’t drop my VSR for a pistol no matter how good it is. For me, it’s still just a tool for inside 20m shots and I don’t need it to reach out any further, but it’s good to know that it can, and it can push beyond that with some work.

Inside the ASG suppressor – I’d replace it ASAP. The inner barrel increases FPS but has a negative effect on performance. Also, the suppressor isn’t going to be able to suppress anything with an inner running through it.

I won’t go into further detail about the technical side of the pistol, because I’ll pas you on to the experts if you like to tinker. If you want a good pistol out of the box, get one, but if you want to learn how to mod it inside and out for ridiculous performance, go to www.onmymk.com. It’s a brilliant resource, and I’m surprised more guns don’t have fan pages like it, but then I don’t think many other guns have the same sort of following. And that’s what sets it apart – the ability to upgrade and customise to get even more out of it. At the price point it’s at, the ASG is a great option for a sneaky sidearm and even though I got a bit of a dud one, I’d happily recommend it.