Just a quick article today while I’ve been starting a new suit using some new materials and ideas, and thought I’d share what I’m doing in the hope it helps someone else with their build

Ignoring the lenskin, which I’ll be playing with later, here’s my Viper cape in Multicam on the left, and in the middle, some cheap netting from ebay. For the winter, which here in the UK is 9 months of shitty miserable weather, I’ve stripped my rifle camo and replaced it with Gorilla brand camo tape from Skirmshop.nl. 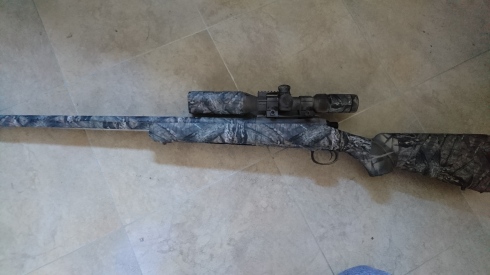 It’s nice stuff, but on the whole, it’s still one long uniform pattern in the shape of a rifle. This needs to be broken up and camouflaged better, although it’s a great base to work on. 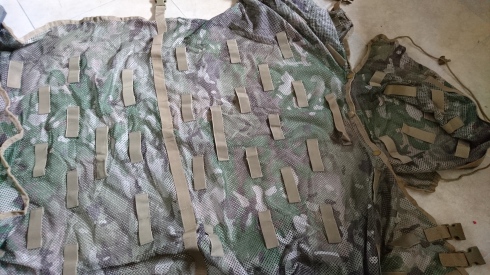 The same applies to the cape. It’s a good starting point but needs bulking out. It needs a different, less uniform silhouette. While chatting to the guys from Sniper Ops, a link popped up for some camouflage netting material used for shooting hides. It looked ideal, but when it turned up, looked nothing like it’s picture on ebay.

So, this is what turned up. Very bright, new looking netting made from netting. Although, it weighed next to nothing and is cut into camo netting style shapes which I’ve used to good effect in the past. It just needed some work… 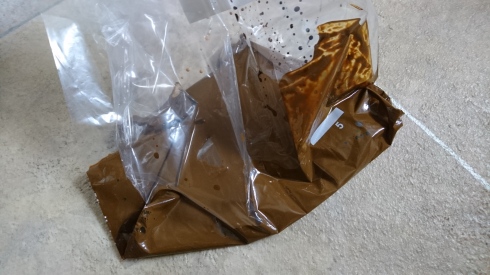 This is my method of choice for colouring leaves and other garnish. Although I could have stuck this in the washing machine with fabric dye, I don’t like the uniform colour that produces. Acrylic inks are available locally at a craft shop and they’re waterproof when dry, and come in a good range of colours. So I picked up a light brown, dark brown, and grey. I put a bit of water in a food bag and add the ink, about a 50/50 mix. There’s a (crap) camo pattern on the netting and I don’t want to lose it completely and stain the whole thing one flat colour.

Then add whatever you’re colouring, tie the bag securely, and shake it around a lot. This will ensure an uneven, blotchy colour but that’s exactly what you want. This bag pictured here is the second bag which I mixed up to be a lighter colour, which gives me a bigger palette to work with.

And here’s the finished product. Still retaining the pattern, but dulled down and with more colours. This stuff is going to be ideal for adding depth to the rifle, goggles, balaclava, and in patches on the cape too. Really useful material and I’ve got several metres of it. 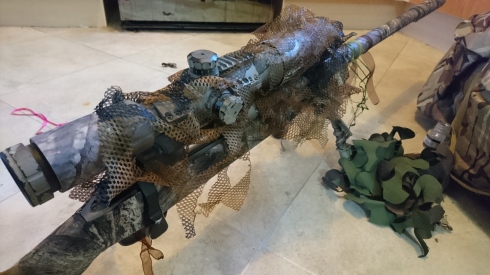 Finally, here’s a bit cut up and put on the rifle so you can see how it looks. There will be a lot of other materials added on top, but as a base it disrupts the silhouette of the gun and adds different textures.

Read this far? Here’s the link for the netting as a reward. Hope it helps with your crafting!