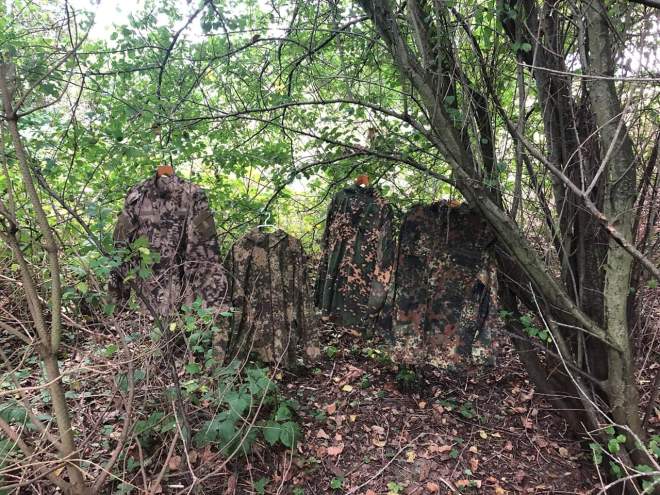 How do you go about getting colours to match the environment you play in? One of the most common issues with a lot of suits, although brilliantly made to add depth and texture, is simply getting the colours wrong. A ghillie colour matched perfectly even with no decoration will work better than a well constructed leaf suit that is totally mismatched with it’s environment. Getting it right begins way back at the start, where you pick your base suit, so what is it you should be looking at?

I’ll start by talking a little about some of the sites I play at locally. The main one is Dirty Dog Airsoft, which is a mix of grassy fields, light woodland and urban. Obviously there’s a clash there between the grass and the woodland, which really require two different suits because of the contrast. I have a proper woodland site nearby too, NTAC, which suits dark browns and has a lot of leaves on the floor, and on the whole is a very easy site to make camouflage for. Then there’s a very big one, Raw, which is mainly a mix of birch woodland (very light in colour, lots of grass and other stuff growing in it) and pine forest (lots of dark browns and oranges). Because of this variation of environment, I experiment with a range of suits and materials and have ended up with several different setups. Throw in the fact that I like to travel the UK playing sniper, and it’s an endless task. I’ll focus on my main airsoft outlet though which is Dirty Dog, where most of my photos are taken. As well as the two very different areas, grassland and woodland, there’s also seasons to take into account. Not four, but I work off two. Winter and summer. There’s about 4 months of summer where everything is a very bright green, then there is sniper season – winter – where everything changes to browns and tans and it rains a lot…

Here’s a couple of pictures to highlight the main point of this article. The first one is me in a woodland leaf suit, with a very dark brown silhouette. The thing I hate about leaf suits is that, although up close some do have a nice woodland type print on them, from even a short distance this blends into one big dark human shaped outline, and on a lot of facebook groups and other forums, the advice immediately given is that the base suit is too bright – which is correct because it’s new and clean – and the solution to “dull it down” is usually to dye it with dark brown Idye poly. So what you end up doing isn’t to dull your suit, but enhance that dark silhouette by making it darker.

Granted, if your local site was a dark woodland site with a lot of dark browns, leaves everywhere, then that’s fine. But a lot of suits go wrong right at the beginning with bad advice about colours. Here’s the second pic. Similar area, better colour matching.

Same suit, same site but a return visit with a few colour changes. It’s not perfect, but not bad considering I just lay in the grass, with no intent to hide (our base was under attack so I jumped in to put some fire into the advancing enemy). And that brings me nicely to the next point.

What I mean by that is this. If you were to flick through social media you’ll often find pictures of snipers in an environment and they’ll be showing off their camouflage and asking “can you spot me”. Obviously it’s a staged photo, and some are really difficult to see, which is great. But when you look at that picture, you’re told there’s a sniper in it somewhere. You know. And you look.

In game, assuming you’ve been able to move stealthily into a position and you come across some patrolling enemy players, they don’t know you’re there, and this is key. What you want from your suit is for nothing to give you away. In the unlikely event these players are alert, they’ll be scanning the area for your team. If there’s a dark shadowy figure, or you have bright orange plastic leaves or something else that might highlight your position, then you’ve put yourself at risk. If they’re scanning the area and their eyes pick up lots of similar colours, eyes won’t recognise what they’re seeing as being anything other than boring natural things like dirt, grass, branches etc.

To go back to that first picture of me in a dark brown leaf suit in the grass, you’d be able to pick me out from 200m away by looking across the field I’m in. If I had some kind of green and tan camo on, even if it wasn’t 3D and wasn’t at all decorated, there’d be much less of a chance.

Attention to colour is key.

There’s a video I always recommend any sniper to watch, new or old. It’s an advert for ASAT camo, and although old, it makes some key points about colour. Click here.

Choosing BDU’s for the environment

A leaf suit may be a popular option, but BDU’s offer a greater range of colours and patterns to better match your environment. Followers of Le Covert Sartorialist on Facebook will be familiar with the method of using spray paints to further tune the colours and patterns. In his words, you need to match the 2D to the environment first before you add the 3D elements, which makes it far more effective. Some players may choose to mix a leaf suit upper with BDU pants, and the rest of us will usually wear BDU’s anyway. So it’s important to get the right one. 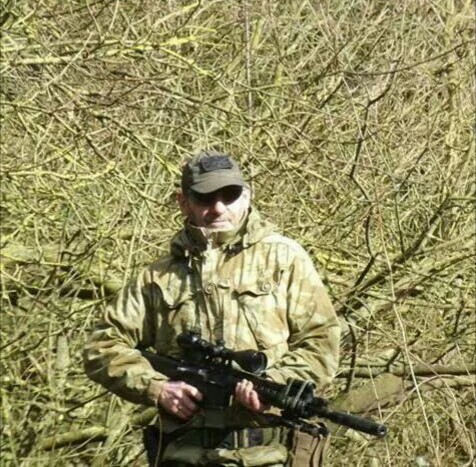 This is a winter photo of the Head Marshal at Dirty Dog, Richie. He’s a lethal sniper and someone I’ve learned a lot from. He’s wearing desert DPM which has a very slight olive dye, and although there’s nothing else attached, it’s almost impossible to find him even in a Spot the Sniper photo. The colour match is superb to the terrain, although this isn’t your typical “woodland” camouflage. His camouflage doesn’t cast a dark shadow against the backdrop here and it’s the shadow of a human outline that our eyes are trained to pick up on.

At most sites in the UK now, the vast majority of players are wearing Multicam or DPM patterns and colours. They’re easy and cheap to get hold of, and aren’t bad camouflages, but perhaps easily picked up on by the eye due to their popularity. Thankfully, there are a huge number of patterns available on the market now, as  . After the commercial success of Multicam, there are also plenty of companies now as well as nations who are trying to develop newer and more innovative camouflages. Kryptek, ATACS and Pencott are among the more popular of the newer camouflage patterns, but just because it’s new doesn’t make it better. The point here is that we have a large number of patterns and colours to pick from if we want to use them ahead of a generic leaf suit approach (which may not always be the best option). An old tip as well is to mismatch top and bottom, so instead of a human shaped 2:1 outline, you cut it in half (not literally) and split that shape into two smaller ones, which may include a leaf suit jacket and bdu bottoms for example. If you were in a kneeling position to shoot, it would then be possible to match the bottoms to the ground (dirt, leaves, twigs) and the upper, depending on local vegetation, to the bushes at what is roughly waist height.

Here’s an excellent comparison by Lars Lyhne Lundqvist, of a selection of “woodland” camouflage patterns.

You can see here how the Kryptek highlander pattern works well among the branches. The Flecktarn is a good match for the floor. The Pencott, which is very highly rated among the newer patterns, in the top picture is far too bright for the area, and the green is a mismatch – newer and perceived “high tech” patterns arent always a winner. However, in the second picture all four patterns even at a short distance do work quite well, without any alterations or 3D additions. Although we look at camouflage patterns as sometimes being a bit basic, bear in mind that they were designed to work in the first place.

Once you have your base chosen carefully, it will probably be about 50-70% matched to the environment, because nothing is perfect out of the box.

One thing I do carry to sites when I’m in the process of building a suit is a set of paint mixing cards from the local DIY store. Suits are built at home, and it’s difficult to get the colours right from memory and photos alone. It’s a case of just holding them up and seeing roughly what sort of colours I need to use. 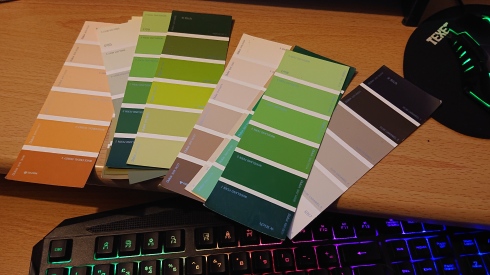 The bulk of the fine tuning on colours can be achieved through spray paints; Montana spray paints are a great choice due to the huge range of colours, and there are a lot of good military coloured spray paints out there too. See the materials guide for a few links. Be careful not to buy anything too bright, and make sure all your paints are matt. Shine needs to be avoided. It’s always worth taking a few paints to the site with you as well, so you can make adjustments if needed. If you have a dedicated pair of sniping boots that you don’t mind modifying, use sprays to camouflage them a bit and break up the shape and the flat colour. Remember to colour things like black buckles, straps on kit and anything else that stands out. Looking dirty is looking good.

One of the things I’ve noticed most about ghillie suits in games down the years is that often the colours used are very strong, and too rich for the environment. Note that out in the field, it’s dirty and not as well kept as your garden.

Here’s a pic to illustrate. It was taken at a Sniperworks event, and is a really well crafted suit, but given away by very bright colours against a dull, pale backdrop. The lead suit pants unfortunately cast a very distinctive silhouette. Again, this will come back to your analysis of the terrain you’re working in.

It’s worth noting that there are two types of Jack Pyke leaf camouflage systems out there, an old and a new. The old one is an incredible piece of kit, with really dull colours and is highly sought after at the moment. The new one is very vibrant, and one the whole, pretty crap. Not because of the quality of the suit, but the odd selection of colours.

Use colours well, and you’ll disappear. Use colours poorly, without consideration, and you might as well be sat there holding a glowstick. I hope this guide has given you a few ideas, but remember a camouflage system is exactly that – a system, not an individual part. If you get the base colour right though, then you have something to build on.

4 thoughts on “Getting colours right”