Partly a response to a question I had in a Haloscreen group, and also something I haven’t covered yet but was meaning to. Cotton leaves for ghillie suits. These are really becoming a key component of Haloscreen groups but I’ve also seen people doing cotton-only 3D on their suits, like Joseph Keller (@instagram – I’m a big fan. Note that with minimal 3D compared to a very busy leaf suit, his stuff still works superbly.). It’s a bit old school, but can this boring old fabric topple plastic leaves as the best method for camouflaging your kit?

As regular readers may be aware, I’ve recently been working on a Haloscreen suit to replace the flimsy and flawed leaf suits in my collection. To be honest, I just feel there are too many issues with leaf suits so I’m going to build an “ultimate” sniper suit out of a desert DPM smock and windproof trousers (more details of that here).

The first layer to go on the suit will be some dead leafy stuff, on top of the dirt coloured base, as it is in nature. Where leaf suits are uniform (yes I know some expensive suits claim to not run them in straight vertical lines, but they are still stitched in straight lines and are all cut the same size and length. Think about it…), I can make leaves that are varying shapes and sizes for a more random and natural pattern, and get shapes more native to the area rather than relying on maple shaped leaves from China. The general trend with Haloscreen is to use cotton bias binding, which looks like this;

Lightweight, very easy to cut into pieces and I do have some to use, but I want to be able to make more shapes and sizes, so I’ll be using natural white cotton sheets.

The argument for using cotton is that it holds water. Now, I remember when leaf suits started appearing and they were billed as the ultimate in camouflage, as well as being lightweight, breathable (flimsy mesh that doesn’t take colour very well), and they didn’t hold water. Great. Cotton on the other hand is a little bit heavier, although before anyone complains, look at the guys running full plate carriers, helmets, heavy metal rifles and video cameras and suck it up. It also absorbs water, which is actually where the strength of the material lies. In nature, when it rains and everything is wet, you’ll notice the colours change. Everything darkens. So why would you not want your suit to adapt to the environment it’s in? If you’re concerned about then getting wet as a result, consider that the mesh based leaf suits just let all the water in without a fight, so there is that.

The other thought I had going into this build was a conversation from a teammate who used to serve in the British Army. He asked me in January if I thought it would be possible to make an IR resistant suit to help with milsims, where we often go up against opponents with night vision goggles on. Now, not having any military experience myself, I admitted I didn’t actually know much about how night vision works or how best to combat it, but the idea does seem useful as we see more and more players equipped with the capability. He explained that plastic and polyester based materials tended to glow brightest through night vision, which is another area that leaf suits then fail in. Additionally, all these plastic leaves we attach don’t help (those “silk” ones? They’re not silk. They’re polyester. Sneaky leaves too, but they have the added bonus of looking awful to the naked eye too). I was told that natural materials, being that nature is generally full of them, blend in because they’re not shiny and reflective. And I knew Haloscreen material itself is properly IR treated. Thanks John, good info.

Why white cotton though?

I think this is where I’m straying from most of the tutorials and guides online, but I’ve got reason behind it. The original question that I was asked was about the process I had used to dye my cotton, and I’m now hoping I took enough pictures to demonstrate.

I know I could have bought plain brown cotton sheet. Maybe a dark earth colour, like the krylon spray paint;

I could have got a few shades of brown and had a good range of colour. But here’s the problem. I don’t see colours like this in nature. Flat, rich colours are great for curtains or bedsheets, but nature is outside. It’s bleached by the sun, weathered by the rain and wind. It’s dirty, and full of washed out colours. So I wanted to replicate that. 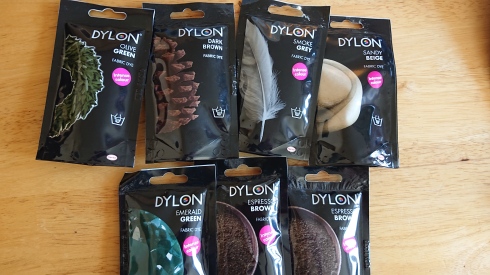 Do not buy the Dylon machine pods that go in the washing machine. You don’t want an even, flat colour here. Get the stuff that you use in a bucket to hand dye. Also, it’s more expensive.

Dyes were mixed up, using combinations of brown and grey in different amounts (50/50, or 25/75, I used a couple of different packets of each colour). Grey is important to make a paler, more washed out colour, and because there’s a lot of grey browns in nature as opposed to rich chocolate or coffee colours.

The white cotton sheet was cut down into smaller squares and shapes. This is because dye colours darker the longer you leave it in, so I could pull individual sheets out at different times to get different results. I’ve used dyes a bit in the past and decided I’m absolutely rubbish at it. Fabric goes in rolled up in balls, and some floats above the dye so it doesn’t take the colour properly and I always end up with a patchy, messy, uneven colour. Which is perfect. Don’t try and make this look good!

Going from a white background and including light grey, will give lighter, more bleached looking patches too, whereas if i’d started from dark brown that wouldn’t have been possible.

Note that the fabric will come out a lot lighter once it’s dry – but also, this will be the colour of it in a wet environment. Good, eh?

And the final result, with some real leaves on just to show the colours in comparison. It’s not too far off, so I’m happy with that. I do have a few darker, and a couple of lighter sheets too. Hope this helps you get a better colour and more appropriate shapes to your suit.