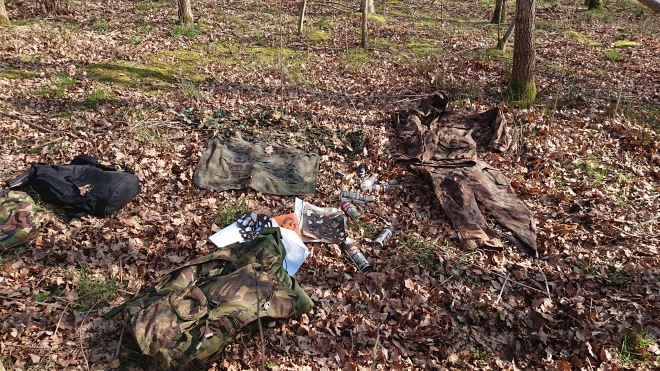 Behind every good sniper, is another one. I know I’ve said that a few times before because my phones predictive text brought it up instantly. In game, having a second pair of eyes and a second rifle obviously doubles your capabilities – more firepower, more awareness, and more brain cells. It’s the voice behind you that says “that’s a stupid fucking idea, let’s not”, the shot that takes out the guy you didn’t see, and the memo that reminds you what the objective was. I’m a big fan of running snipers in pairs; and I don’t mean one as a spotter with a close range automatic weapon. Two proper snipers are far more effective working together, and it isn’t just limited to in the field. 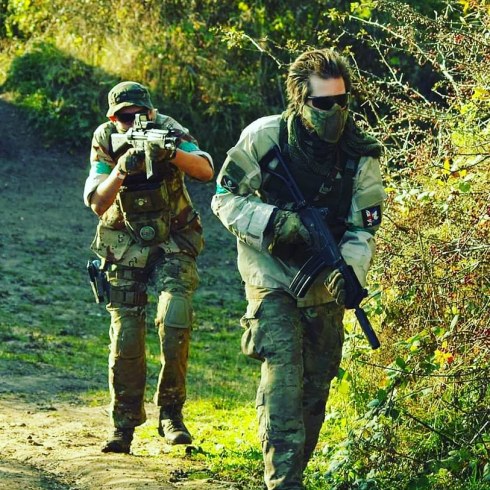 Your buddy will always have your back. Probably more than I’d be covering his front.

I feel like I’ve lost my right arm this week as my long time sniper buddy Aiden “Bubba” Elliot has moved on to bigger and better things, meaning airsoft for him is going to be extremely limited in the future. Obviously I’m really pleased for him, he has a really exciting future ahead, but he’s been a massive help to me especially in the last couple of years and I will miss him. His knowledge of military history and equipment is vast and always interesting, and I’ve learnt a lot about issued kit from different eras and how it all fits together. He has a sizeable collection of real steel kit and was always up for trips to go surplus shopping, on hand with sound advice as I rummaged through shelves. He has a great eye too for camouflage and whatever I made for sniper concealment, he was critical where he needed to be and that led to better solutions. We ran together at several Stirling England games, did the AI500 at The Sandpit, played US Army Rangers during Black Hawk Down, ran Task Force Black inspired kits at local skirmish and of course, we were a damn good sniper team.

In return, I’d like to think I helped him with the tech stuff and the tactical approach to games. He listened and learned, as I did from him in his areas of expertise. We evolved tactics, and that instinctive knowledge of what the other one is about to do in a game. He helped me with setting up Sniperworks, along with a few others, and hopefully we can get him along to a few events in the near future to share his knowledge with others too.

A sniper buddy is invaluable to any sniper, no matter how good they think they are. Not just someone who has your back on the field, but someone who will share ideas and help develop you and your kit off the field too. Someone who will answer messages at stupid times of the night to give constructive feedback. Someone to bounce ideas off. Thanks for everything, Bubba.

On to the rest of this week’s blog – the new suit build.

Two days before he left, which I wasn’t aware of, I dropped Aiden a text to see if he would help with my new suit build, to get the base colours a bit better. So off to the local woods we went, out of sight of the public of course but carrying no weapons, to get to work.

Regular readers will know that I’m building a Haloscreen type suit onto a set of British Desert DPM (smock and windproof trousers), because leaf suits just aren’t quite tough enough and have a few flaws. It’s taken a couple of months to source the right base clothing in the right size, because I’m a bit on the large side and this stuff is increasingly rare. The initial attempts to dye the polycotton were difficult due to the plastic content and a reluctance to use idye poly, eventually requiring the use of acrylic inks to get the colour to set in. 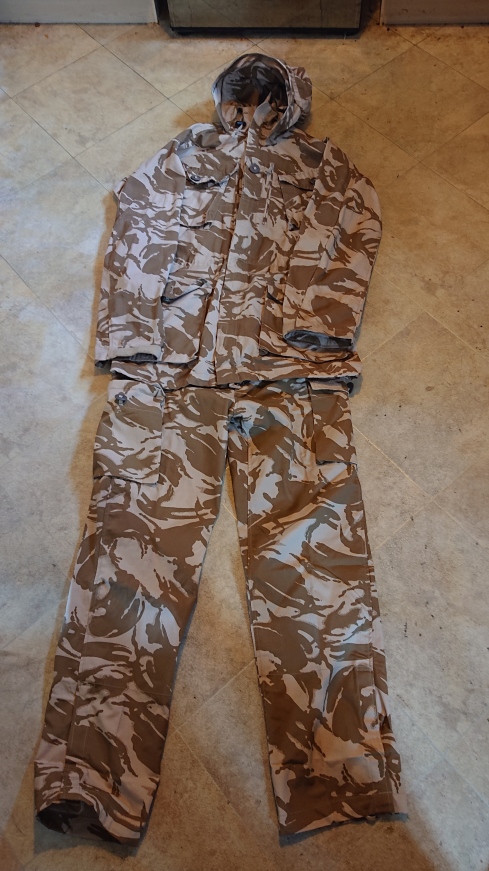 The aim here is to use a lighter suit (desert camo) to create a lighter base colour than most dark brown-dyed leaf suits, which cast a bad silhouette despite the 3D breakup. What I want is a suit that is a bit less specific to one area, as is often seen in “rate my suit” pictures. It’ll be more reliant on colour and tone, and more generic shapes and colours. A bit like a multicam of ghillie suits, but less crap. Something that will work in a few different places, although I would expect to be less effective up close as a result, but that’s the trade off.

A lot of Haloscreen suits begin life on digital camouflage patterns. I don’t like digital patterns very much. My environment isn’t minecraft. I need more organic shapes, which is partly why I selected dpm which has a brushstroke effect (the other reason being that I wanted something that was available in a smock, for cheap). The other pattern on the list was Flecktarn, which has good colours and breakup, but I’d just watched a film about the 1991 Gulf War and that decided things – I’m really methodical like that.

The plan to replicate organic shapes came about from an Internet video I saw about making camouflage stencils and I hope the creator doesn’t mind a link here. It’s a brilliant, and cheap, idea that creates an array of rounder shapes and patterns. 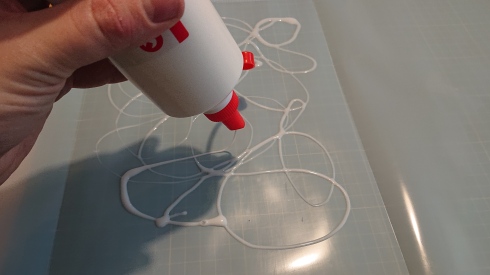 If you don’t want to watch the video, get a plastic folder, cut it open, and spray with WD40 to stop it sticking. Then just draw random shapes with PVA or wood glue. Mine came out OK, although a little delicate (cheap glue perhaps) and I did find after a load of spray painting, they got ruined quickly and folded and stuck to themselves, but I’d made three and it was just enough to get the job done. 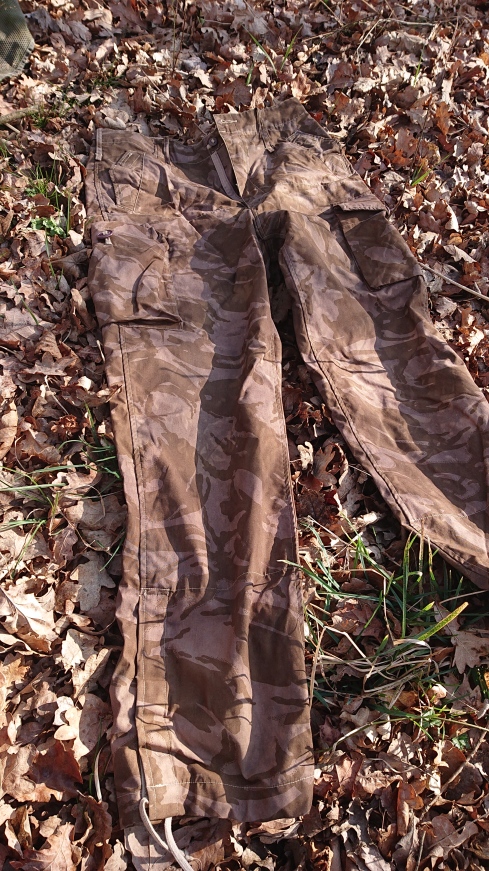 Here’s my suit at the start of the morning, with a mid brown ink/dye. Bubba brought his green webtex cape to experiment with too – it was partially completed from an event last year and it’s well worth a look at. The dyed ddpm is already pretty good, but it still looks like ddpm and that may be a familiar pattern that players will pick up on. I wanted to add some light and dark contrast, to break up the pattern and add other textures in. 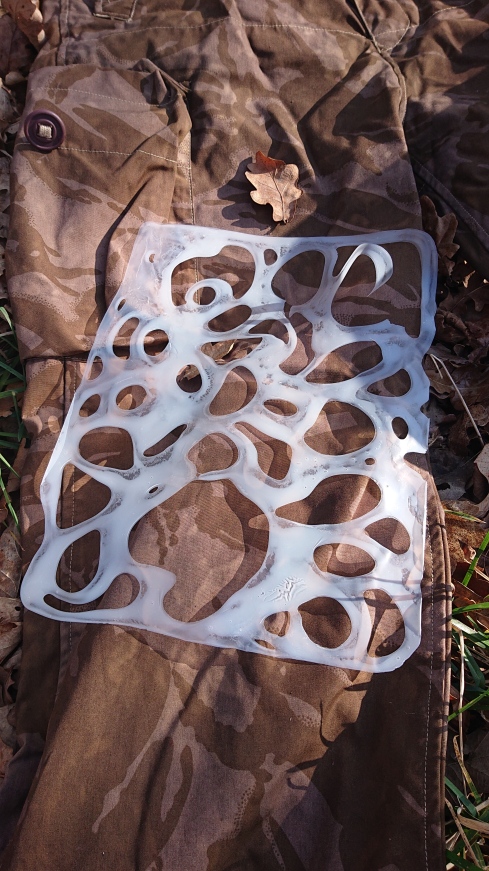 Template out, and I’m using olive drab, dark earth, tan, black and a krylon woodland green, although the main focus will be browns to match all the dirt and dead stuff.

“There are only two seasons in Scotland. June, and winter” – Billy Connolly

OK, I’m not quite in Scotland but not far off and the climate here isn’t great either. We have about 3 months of lovely green summer and the rest of the year is better suited to browns, which does help a bit with suit builds. Additionally, underneath most green stuff in the environment is brown anyway; I’ll be layering greens on top as I need them. 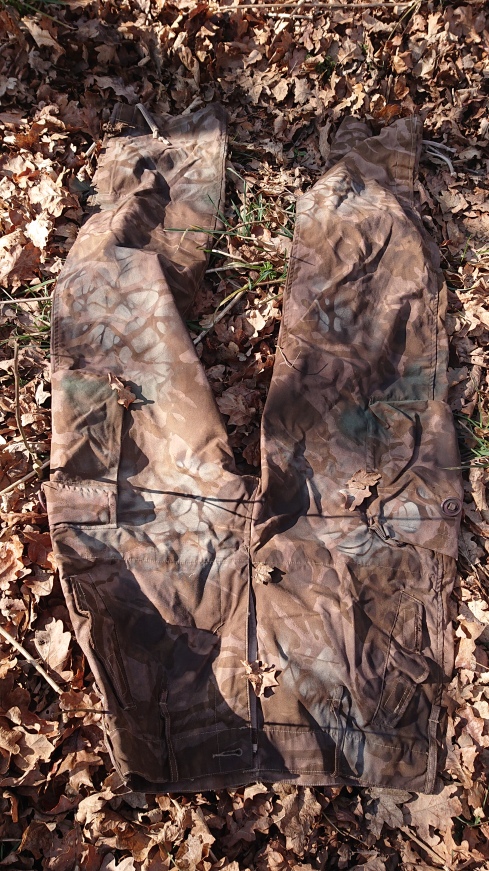 As you can see here, more clearly on the left knee area, the desert dpm is starting to disappear, confused by another pattern on top, but without losing too much of the colours and patterns of the original. Otherwise I’d have just started with a different pattern. 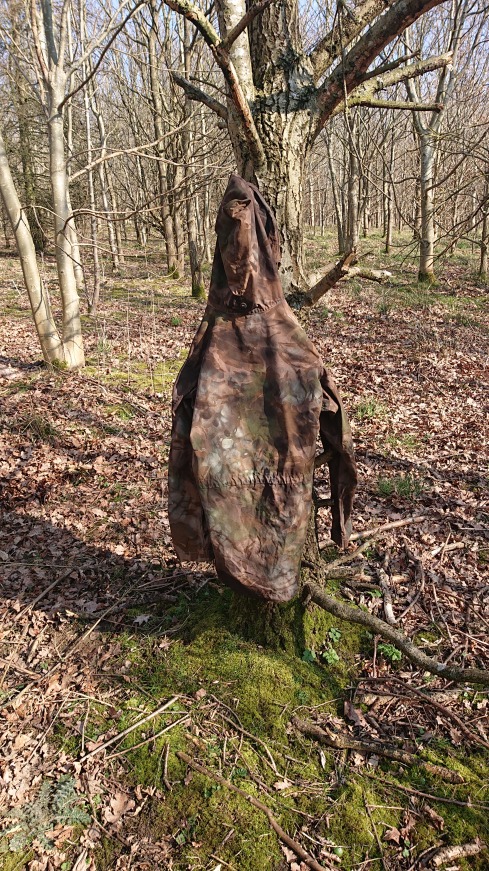 Here’s the smock a bit later on, which didn’t take the colour as well as the trousers. No longer desert dpm, or anything recognisable. For a long time at the start of this project, we were looking at what kind of shapes and patterns would work best, and I think keeping it very simple and not too plant-specific (like spraying fern leaves all over) will help it to work in different areas better. 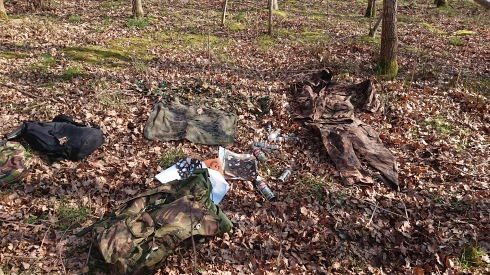 Two bags on the left, Bubba’s cape centre above all the spray paints with my suit on the right. Note that the top half of the cape has 3d added to it, and at this very short distance, has disappeared. Here’s one of his gloves close up – 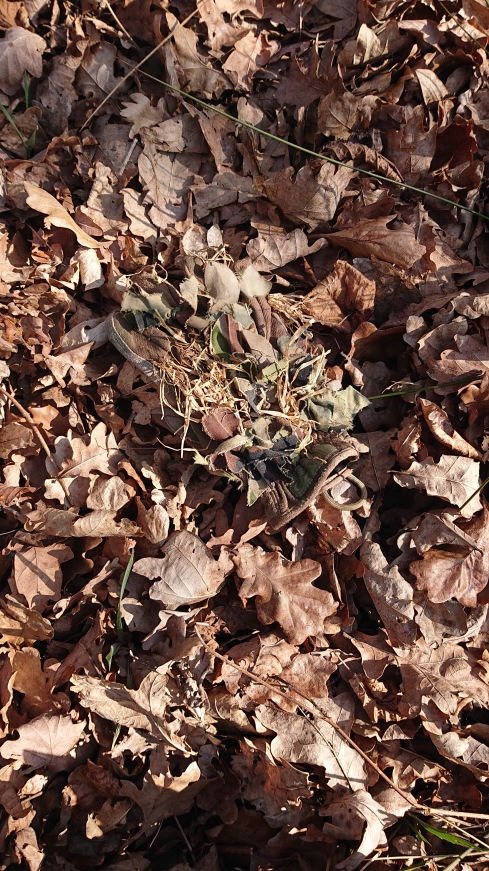 What you’re looking at here is a plain tan Mechanix glove, with a little bit of camo netting, dpm strips and raffia glued on. It’s that simple, and yet at less than a metre is still hard to pick out. Imagine if you didn’t know you were looking at something? Or to put it more practically, that there was a sniper nearby? You wouldn’t notice it. Compared to some of the complex and realistic leaf suit builds out there, Bubba’s is very basic up close. Most of it is old, bleached army camo netting and a pair of old dpm trousers he cut up, which is very cheap and easy to do. No sneaky leaves, no artificial plants.

One thing he does do well, is grouping his materials together and leaving gaps inbetween to create depth from the cape itself to the top of the 3D.

This was after our morning spray painting. The webtex is great because it has vegetation loops to add into if you want to use local site vegetation, or add extra artificial to suit different sites. The loose fitting hood helps disguise the head shape too. I tried it on over the top of my ddpm to test :

Again, this is close range but already very effective. I’m looking forward to getting some 3d onto my own suit.

Ddpm no more, this was the final photo from the session and I’m pleased with the mix of colours. The light and dark contrasting areas will help disguise the natural flat texture of the fabric. It’s a good start, and worth noting that Bubba’s cape was plain green underneath the 3D so it shows what an effect it can have in disguising the suit anyway. Both are far more robust and comfortable to play in than leaf suits and it’s a case of finding the balance between usability, effective camouflage and camouflage that can adapt to different areas within a site. 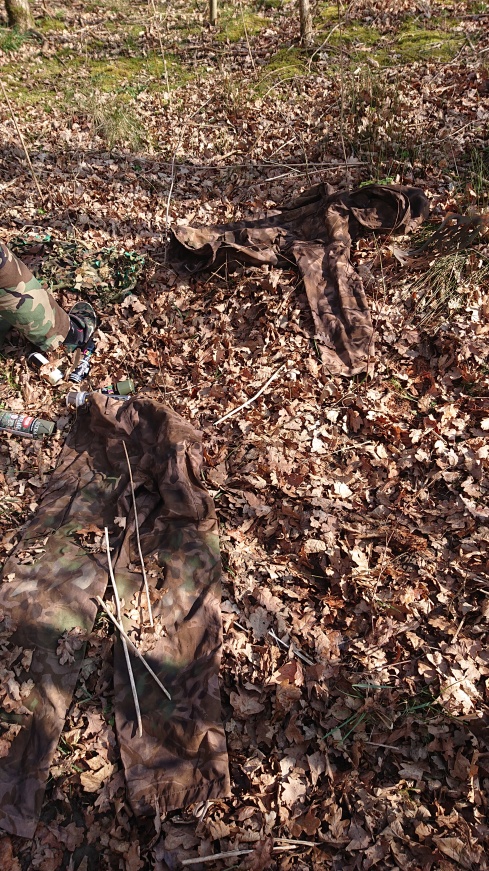 Decent. Still a long way to go, but I want to share each stage of the development so you can see how to make something like this yourself. The base camouflage choice is important, although you can spray it afterwards it’s not that easy to completely change it. We found green spray paints really didn’t take well, often being soaked into the fabrics. Also, a mesh cape being mesh doesn’t show solid colour well, so just try to break it up with light and dark contrast.

That’s it for this week. I’m off to start looking through applications for a new buddy…

One thought on “Tuesday Thinkings #10 – Sniper Buddies and Suit Bases”